What to see in the surroundings 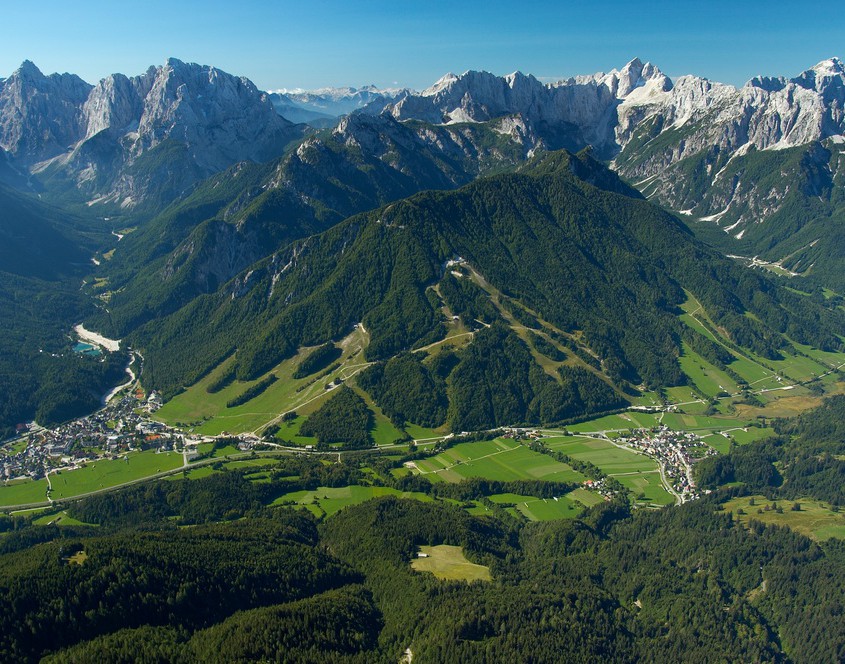 Kranjska Gora is an important tourist and winter sports centre in the upper part of the Sava river valley, by the mouth of the river Pišnica which flows into Sava Dolinka. Around the old village centre, a new, mostly tourist part of the settlement with hotels, vacationing apartments and houses, recreational facilities, stores and ski lifts has been built, with skiing slopes, as well as a network of hiking and cycling paths. All of this gives Kranjska Gora with the nearby settlements Podkoren, Gozd Martuljek and Rateče the appearance of an unified upper Sava tourist area, important both for summer and for winter tourism. Kranjska Gora is the location of important international skiing competitions at Vitranc, as well as ski jumping in Planica.

The story of Kranjska Gora goes back into the second half of the 14th century, when the inhabitants began a large scale cutting of local forests, replacing them with cultivated land as well as pastures for sheep and cattle. It became strategically important during World War I, when Russian prisoners of war built a military road across the 1611 m high mountain pass Vršič from the valley of Sava to the Valley of Soča. The fame of a tourist location has been acquired by Kranjska Gora with the construction of a railway and the first visitors. Some time later, the ski jumping and ski flying in Planica carried the name of the settlement and the valley across the world. This inspired a rapid blossoming of tourism in the Kranjska Gora area, especially when, at the end of the 1950s, first ski lifts were set up on the slopes of VITRANC. 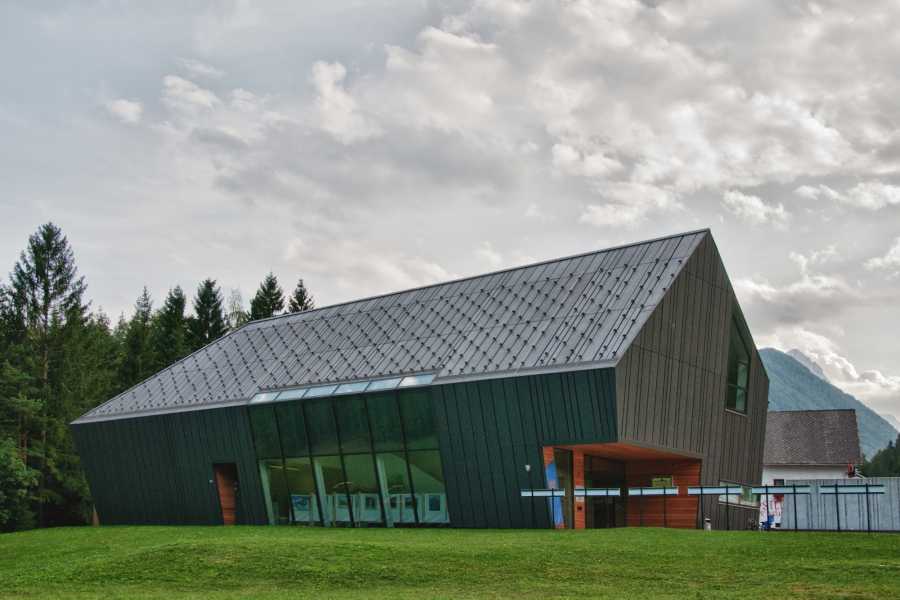 The Slovenian Alpine Museum illustrates the development of Slovene mountaineering, climbing and mountain rescue history, interwoven with educational and conservational content. Its rich collection of historical objects and artefacts, diversity of photographic, film, book, and museum archives, and an extensive museum library, provide clear insights into the powerful, lasting impact of mountains and mountaineering on Slovene culture.

Rateče are distinguished by their position by the triple border of Slovenia, Italy and Austria, as the main regional road runs under the village, crossing the Italian border in the valley of Kanal. On the southern side of Rateče, a view opens into the valley of Planica, surrounded with the tall peaks of Julian Alps. At the end of the valley, there is Tamar, where, from under Ponce, the first spring of Sava Dolinka comes into the light, the waterfall Nadiža.

The village has a distinct alpine climate. The winters are long and cold, but the favourable position at the foot of Karavanke forests and pastures offers the visitors numerous sunny days, when one can walk the mountain woods and meadows.

Rateče is the place where the Rateče manuscripts from the second half of the 14th century were discovered. The originals are kept in Klagenfurt, while the copies can be seen at the church of St. Thomas in Rateče. The Rateče or Klagenfurt manuscript is one of the four oldest known documents in Slovenian and thus an important historical monument of the Slovenian nation.

Planica is best known for one of the largest ski flying ramps in the world. It is the place where humans first flew past the 100 m mark on skis, and later also 200 m. The organisers of Planica prepare the ski ramp every year for new, surprising results… 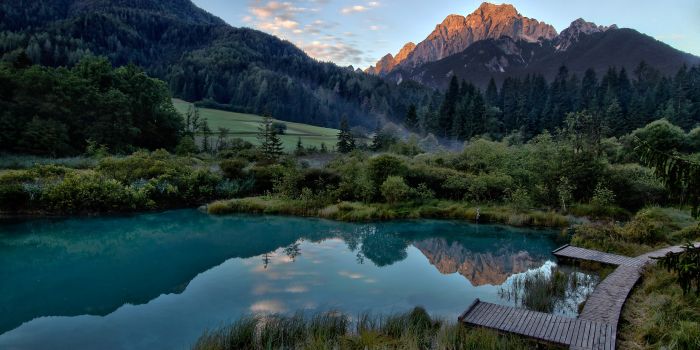 Zelenci are the spring (lake) of Sava Dolinka, a river which joins Sava Bohinjka by Lancovo (a settlement in the municipality of Radovljica), and then flows all the way to the Danube, to Belgrade in Serbia, under the name Sava. The lake by the spring of Sava Dolinka has constant temperature which is 6 to 8 degrees Celsius throughout the year. 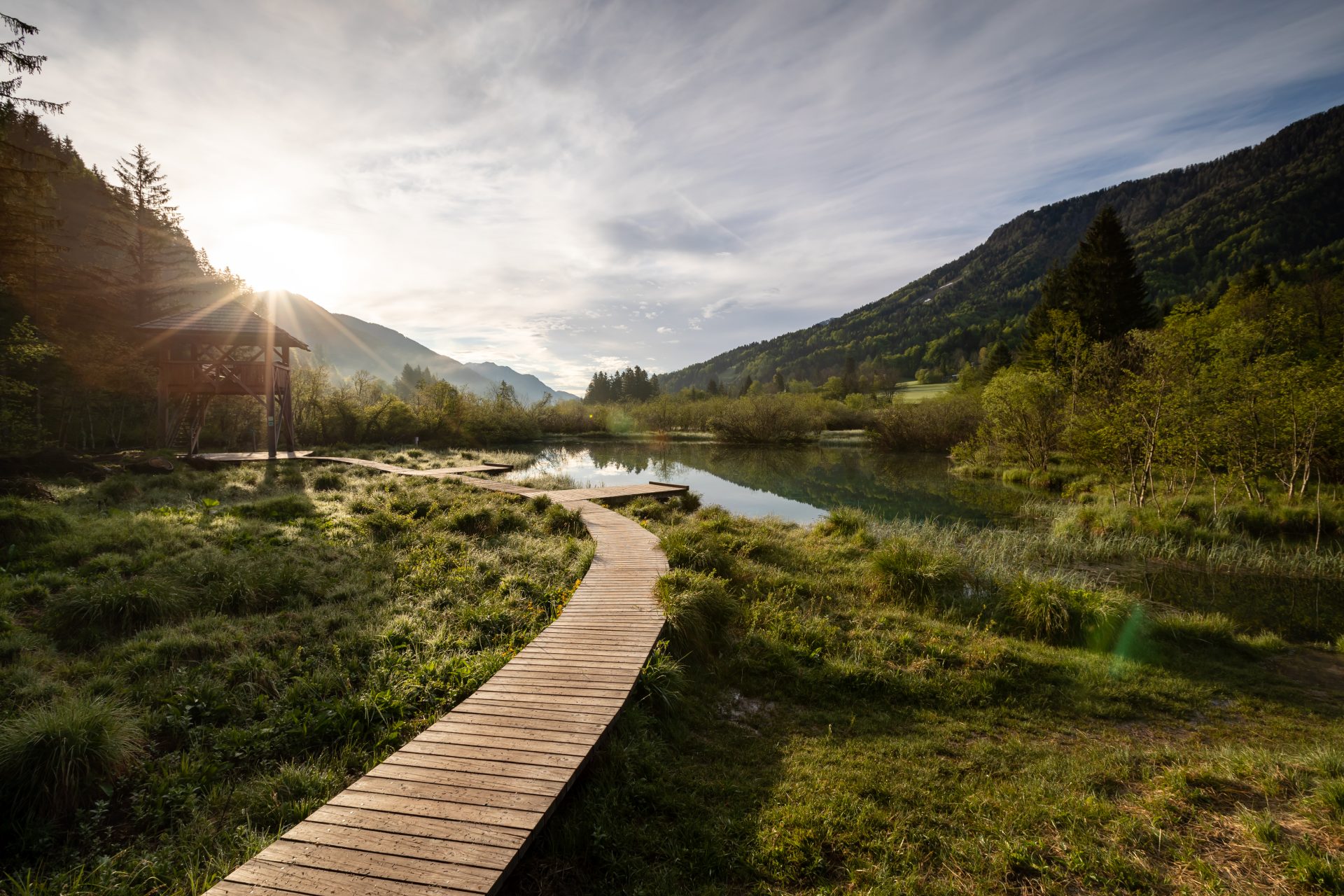 Cycling path was built along the former railroad route. From Kranjska Gora, you can take the cycling path all the way to Jesenice or in the other direction to Trbiž and onward. 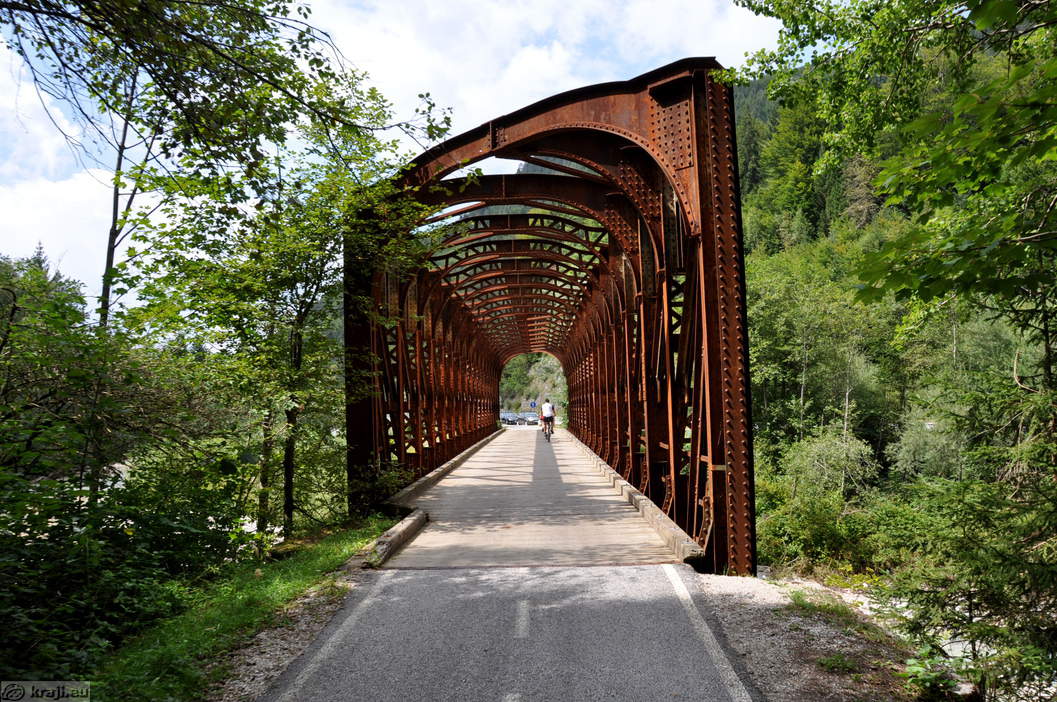 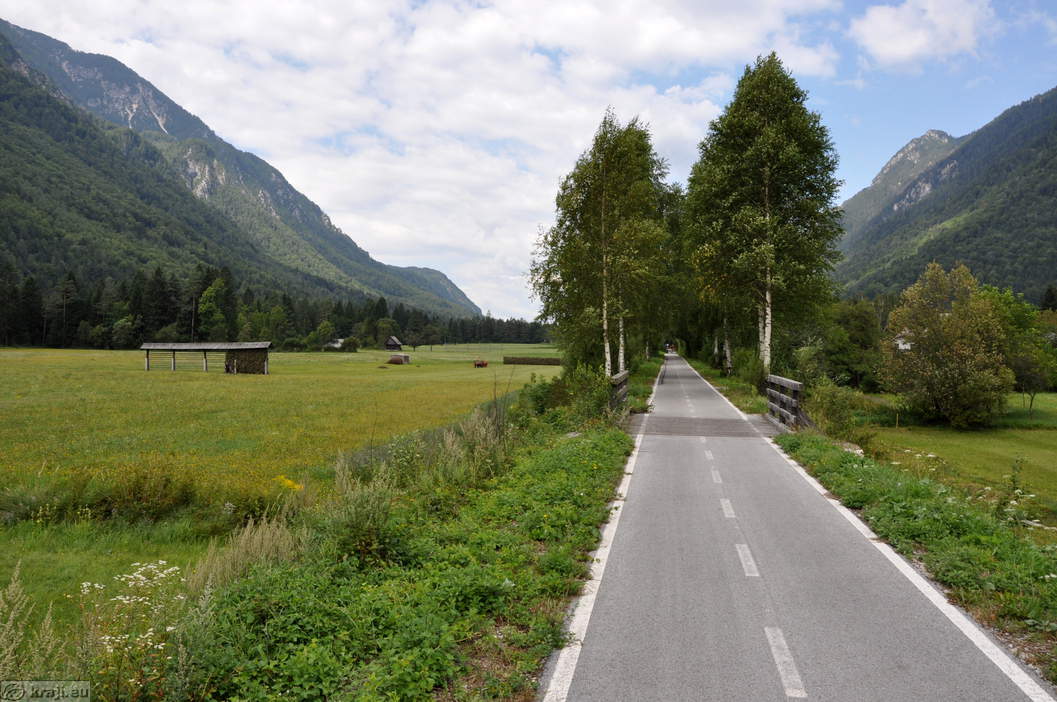 Slovenia has a single island, but its unique nature makes it more attractive than many an archipelago. In the shelter of picaresque mountains, it reigns in the middle of an alpine lake. Its charming appearance made it a symbol of the town centuries ago, and guests from all over the world love to visit and return there. This town, which exists for a thousand years, is BLED. On the island in the middle of the lake, the ancient Slavic ancestors of the Slovenians worshipped Živa, the ancient Slavic goddess of love and fertility. After them, the island was the destination of pilgrimages to the Saint Mary. A millennium ago, on April 10th, 1004, the town of Bled has been mentioned for the first time in history. The German Emperor Henry II then gifted it to the Bishop of Brixen. In the middle ages, it flourished due to the pilgrims, and in the 19th century, those were replaced by tourists. Arnold Rikli of Switzerland discovered a fount of health and well-being in the mild climate and the lake and thermal waters under the castle. His spa offer of natural hydropathy was complemented by guesthouses and hotels by the locals. 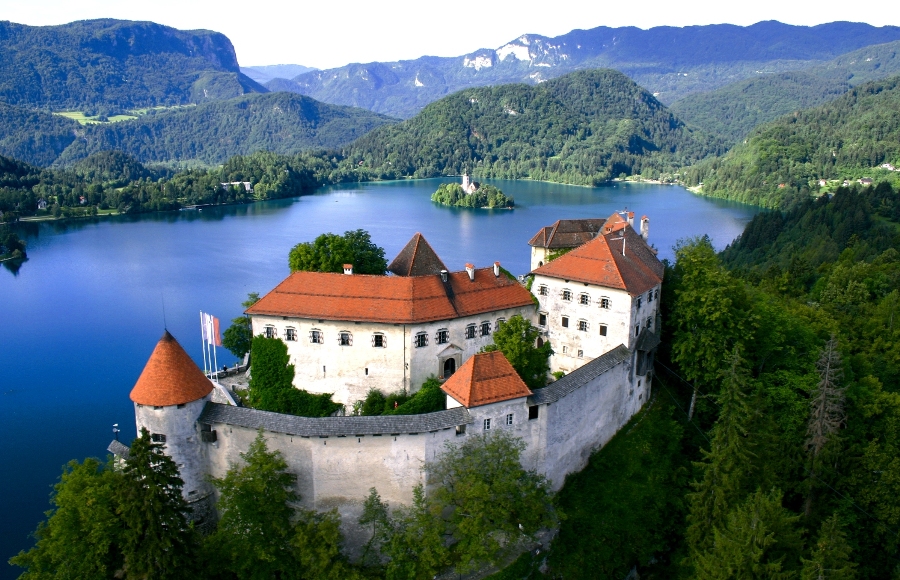 A place which, at the beginning of the 20th century, was the most beautiful spa of the Empire at the time, attracted the European aristocratic elite. After World War II, one of the most beautiful protocol residences of the former state was located here. Many of the most important people of the world enjoyed the beauties of Bled. For decades now, the town is discovered and revisited by the pilgrims of modern times. Cosmopolitan seekers of diversity and beauty, relaxation and inspiration, peace or sports challenges, are awaited here by countless of possibilities. Promenades and coach paths around the lake, traditional boats, ringing the bell of the island to make one’s wishes come true, castle treasures, nearby skiing slopes, mountain hiking paths in the mountains, golf courses, hunting, fishing, casino, congress capacities – these are only fragments of the attractiveness of Bled, which is worth experiencing. Those who live it, always yearn for more… 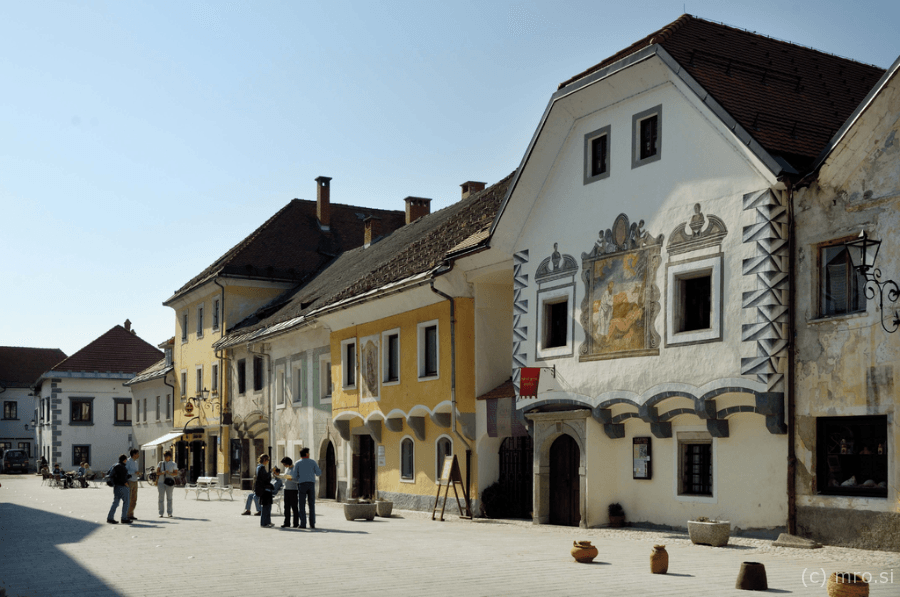 On the natural pier, where Sava Bohinjka and Sava Dolinka flow into one, a city with the highest number of sunny days in the Gorenjska region awaits you. The medieval design of the city can be seen in its layout to this day. The north is dominated by the mighty Radovljica mansion, which occupies a third of the square, while, on the other side, there is a series of picaresque facades of the town houses in renaissance and gothic styles. Here, the characteristic floor piers, small windows and portals of the tuff of Peračica can be seen, a volcanic rock which was excavated and crafted in Peračica, near Radovljica.

The heart and soul of Radovljica is the Linhart square. The charming old city centre excites with its position on the natural pier, with variety and genuine nature of the preserved architecture, with museums, galleries, and other sights to see. The medieval centre of Radovljica is one of the best preserved medieval city structures in Slovenia. Interesting locations include the Šiveč house with a gallery, Mali house with a shaming bench, the Vidič Manor, parish manor and Lectar house with a restaurant and a gingerbread heart shop, where you can see their creation in person to this day. 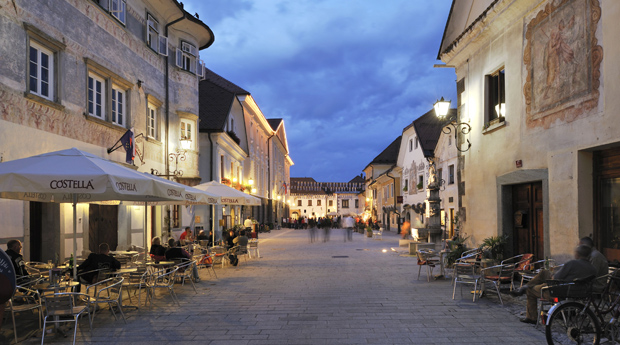 Right by a former entrance into the old town, you will find the birth house of historian and playwright Anton Tomaž Linhart, the author of the first Slovenian secular plays (Mayor’s Micka and This Merry Day or Matiček Gets Married).

Even though the natural pier offered protection to Radovljica, this was not enough in the time of the Ottoman invasions and battles for power. At the transition from 15th to 16th century, the city got a wall with 16 defensive towers and a ditch. The ditch was, through the following centuries, narrowed down and built over, but is the only preserved city ditch in the Slovenian area. In the old part of Radovljica, a gothic tavern can also be found, the chapel of St. Edith Stein, the church of St. Peter, the world famous Beekeepers’ Museum and an exhibition about the renowned man from Radovljica, Anton Tomaž Linhart.

We use cookies on our website to give you the most relevant experience by remembering your preferences and repeat visits. By clicking “Accept All”, you consent to the use of ALL the cookies. However, you may visit "Cookie Settings" to provide a controlled consent.
Cookie SettingsAccept All
Manage consent

This website uses cookies to improve your experience while you navigate through the website. Out of these, the cookies that are categorized as necessary are stored on your browser as they are essential for the working of basic functionalities of the website. We also use third-party cookies that help us analyze and understand how you use this website. These cookies will be stored in your browser only with your consent. You also have the option to opt-out of these cookies. But opting out of some of these cookies may affect your browsing experience.
Necessary Always Enabled
Necessary cookies are absolutely essential for the website to function properly. This category only includes cookies that ensures basic functionalities and security features of the website. These cookies do not store any personal information.
Non-necessary
Any cookies that may not be particularly necessary for the website to function and is used specifically to collect user personal data via analytics, ads, other embedded contents are termed as non-necessary cookies. It is mandatory to procure user consent prior to running these cookies on your website.
SAVE & ACCEPT